As I mentioned in my last post we're building up towards the Pieterpad come spring so this week we had a 8km walk planned. Thanks to Dave's excellent suggestion that I try Kennemerduinen I drew up an apparently nice 8km walk around the dunes and to me rather odd terrain. According to my Garmin maps the area was swarming with tracks to it was fairly easy to draw up an interesting route. As I was to learn, what you see on a map is not always the best route.

We managed to get off away from the house earlier this time, though as we're still getting used to get our daughter and ourselves out of the house in a timely manner... So we were in the car, ready to go, at about 11:30. The drive out there took another 30 minutes, which considering the return time, was very good. When we arrived, Ingrid was hungry again so we gave her a quick feed before we bundled her into the pram. I then discovered that while I had uploaded the route to my Garmin, I had forgotten to include the relevant map tile. Bugger! The Garmin was now not able to nicely map our route and the whole area was just one big flat beige area... With some fiddling the track was at least able to show our route so I figured out we'd be ok.

The sun was at our backs as we wandered away from the parking lot which led to some panicked fiddling with the pram's umbrella as Ingrid started wailing every time she got the sun in her eyes. On the good side this meant that I finally had the go-ahead to buy her some sunglasses! (Am I sad that I think baby sunglasses are unbearably cute?) The faffing with the umbrella was shortly followed by a new panic when when we turned off the nicely paved onto a sandy track and and the gusty wind started blowing sand onto the pram. We took down the umbrella and pulled the rain cower over the pram. Crisis over. Or so I thought. 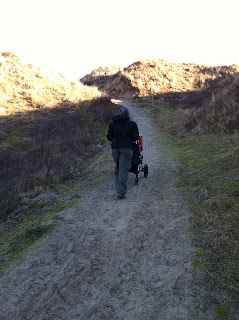 Only a few minutes later the pram started getting bogged down in the loose sand. Temper were fraying and fingers started twitching. I chose to see this more of a challenge while Lande was getting worried that we were too far from the paved track. At this point I noticed the huge drawback with not having the map on the Garmin. I could not see where we would meet up with the paved path again and we were heading right for some stairs. Turn around or press on? I vaguely remembered that the route I had drawn was going on and off the bike path so I figured we would be ok, so we chose to press on. Fortunately it wasn't long before we were back on the paved path and we decided to try to follow this as much as possible. So much for my elegant route...

As our speed picked up again on the bike path as we were no longer bogging down out tempers smoothed out and we started enjoying the walk. Despite the rather sharp wind we were warming up again and I realized that maybe the Silkbody Pilot top (xmas present from parents, and trekmates microflece (xmas present from wife) might have been a bit of an overkill. Luckily my Norrøna jacket has very good venting. Lande took off her Rab Microlight vest, and we discovered that the Quechua jacket that she bought at Decathlon yesterday has no vents... 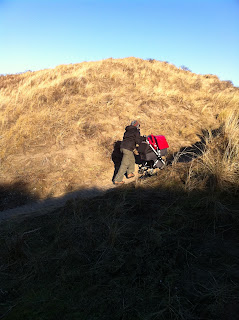 After a while we were feeling quite good and when my route led off onto a sand track again we chanced it, being mentally prepared for what we might face. As it turned out the first sandy track might have been the worst in all of Kennemerduinen as we had practically no issues this time. We did modify the track when there was a split in the track and we scouted it out to see what we were facing.

A little past half way we discussed whether to stop for a little lunch break, but decided to take it on the go, as we didn't want Ingrid who was snoozing happily to wake up if we stopped (as she tends to do). A little not-quite-sweet-enough tea and some chocolate brownie later we felt much energized and even more upbeat, or maybe it was simply the joy of being outdoors in a new and different environment for both of us?

While we were out there we I kept my eyes open for interesting camping spots, but I think we were a bit too close to the parking spot and it's restaurant and it all felt rather busy. I'd like to do a camp on the dunes like Nibe did in December. 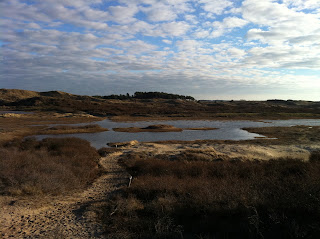 As we got back to the car we agreed that it had been a nice walk. Because of the route changes we were not quite 8km, however it had been more tiring than last weekends walk as pushing the pram through sand was quite exhausting. I think that the only way to make this a bit easier is to switch to a carry frame for Ingrid. I'm not sure she's ready for that yet though as she's only 4 1/2 months old, and with the wind driven sand it might not be very nice for her. I'll definitely get a frame as soon as I get my pay though so we can begin practising.

Anyway, this is where things really started slowing down. We had a second lunch in the car as Ingrid was now fretting and a bit hungry. We probably didn't get away for another hour! Then on the way back the road was packed and 25 minutes in we discovered that Ingrid was actually not a little but a lot hungry! We had to pull off the road and give her a second feed before she would settle down enough to deign to sit back in her chair.

All in all it was actually a very nice day. We felt very good walking and are planning to add another 4km for next weekend. This will probably mean a feeding on the track, and I'm considering getting a pop up shelter from Dechathlon for this. They're heavy and bulky, but as it's only for day trips I don't think it's going to be an issue.
Posted by Unknown at 21:48